Tradition, Family, Honor and Change.  What a great way to describe our recent visit to Schoepf’s BBQ in Belton, Texas.  Then if you tie it into the Belton annual 4th of July Parade, that statement fits very well.  Usually, we go to the parade every year and it includes a visit to see Ronnie Schoepf and to get some of his old school Texas Barbecue.  He always has a great atmosphere, and that old school brisket was a fun stop for us.  However, we didn’t go last year because of the government problems and with all the BBQ places I visit, sometimes it’s hard to get back to a place when you miss your regular visit.  So essentially, we missed two years of coming in and to my surprise, Schoepf’s BBQ changed in a big way.  To be more specific about that change, it came in the form of Staci Schoepf, Ronnie’s wife.  Staci said that in order to be the best we must do two things.  One, we must be known for our brisket and two, we must provide the best experience for our customers as possible. 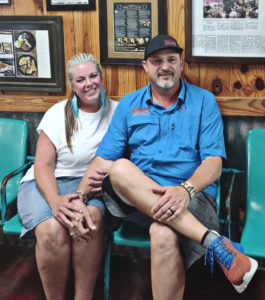 Now, one of the first things I learned about this Texas Barbecue Power couple is that they do nothing without the others input.  Ronnie said that while they could both run the business successfully alone, why do that when they can utilize each other’s passion and talents.  He said each has strong points and together, the two make the business stronger.  So, what did they do to change the business you ask?  Well, the first thing they did was research, Staci and Ronnie traveled extensively learning what others were doing successfully.  They listened, they observed and then together, they made a plan and in 2019, that plan started to come together.  The first thing they did was change their wood from mesquite to oak and then in the same successful swoop, they changed to selling nothing but Prime Brisket.  Staci has told me that she personally seasons every brisket they sell and yes, I am here to tell you my first bite was an eye opener.  The world of Schoepf’s BBQ had changed in a way that easily propelled them from a good stop on the Texas Barbecue trail to a must stop and one of my personal Top 5 in the business. 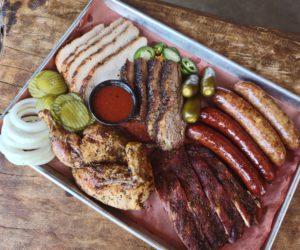 While enrolled as a Freshman at Texas State, (formally known as Southwest Texas State) Ronnie Schoepf Sr. called Ronnie Jr. and asked, how would you like to open a BBQ place in Belton?  From there the wheels of success started turning.  Ronnie Jr. already a business minded young man went out and found the building they are currently in and secured a meeting that would provide the loan to buy it.  In 1993, Schoepf’s BBQ opened and over the next few years with a lot of work, the business started to take shape and be successful.  Already knowing each other for years at this time, Ronnie at Southwest Texas, and Staci at Temple Jr College, both enroute to Texas A&M earning Degrees in Agricultural Economics, they both soon found themselves in successful corporate jobs.  However, to be closer to home, Ronnie walked away from the corporate world in July of 2007 and in August 2007, he and Staci bought Schoepf’s BBQ outright from Ronnie Sr.  In 2011, Staci, a highly successful woman in the corporate world, wife, mother, and entrepreneur, also walked away and joined her husband full time at Schoepf’s BBQ. 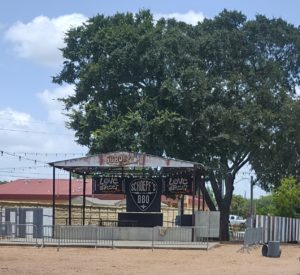 Today, with the help of their older children, they accomplish what most in the business cannot.  Ronnie and Staci have Schoepf’s BBQ open 7 days a week, Sunday thru Thursday from 10:30 am to 8 pm.  They also serve breakfast on Friday and Saturday opening at 6:30 am serving breakfast till 10:30 am and doors open till 8 pm.  To be open one, two, three or even four days a week is one thing but to be open 7 days a week and consistently provide the same quality of food is a great accomplishment.   So, with all of this it’s easy to determine that Schoepf’s BBQ is certainly not your average BBQ joint and very rarely will you see a “Sold Out” sign on the Schoepf’s menu.  Ronnie and Staci believe that no matter when you walk through the door, you should be able to order anything on the menu. 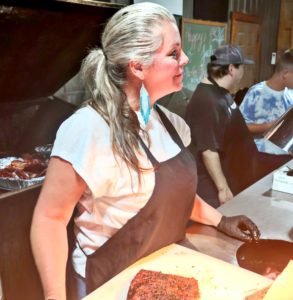 Another big part of their success is Staci’s menu items as she has created and introduced most items served.  When we found our way to the front of the line, I ordered the Holy Trinity of Brisket, Pork ribs and Sausage with three sides.  My sides were Borracho beans, green beans, and banana pudding while Marlene ordered a Pulled Pork sandwich and the Mexican Street corn. The moist brisket had such an amazing taste that Marlene was surprised by the look on my face.  She said she could tell it had to be some of the best I have ever had.  It easily pulled apart but maintained its structure under its own weight.  I told Marlene, this is different, and this is amazing.  So, I tried the pork ribs and again was just shocked at the flavor and how it was seasoned.  As I tried each item on my plate (except my banana pudding, no one gets my banana pudding) I kept asking Marlene to try this and take a bite of that, but she finally told me I had to stop so she could actually eat her own food.  Not sure why though because I certainly ate more than my share of her Mexican Street corn.  However, speaking of Mexican Street corn, going down the items listed on the menu it certainly confirms that one of Staci’s passions is Tex-Mex BBQ.  Starting off with fresh homemade tortillas and then reading items like Teja’s Nachos, Brisket Spinach Quesadillas and Tamales with both Brisket & Pork, the customers coming into Schoepf’s BBQ are getting an entirely different experience from what they had been expecting.

Also included in the Schoepf’s BBQ experience is one of the most well-known live music venues in the State.  With a seating capacity of 3000, Ronnie has built a venue that rivals any in the business, hosting bands such as Robert Earl Keen, Cory Morrow, Michael Salgado, Kevin Fowler, Aaron Watson, Rick Trevino and many more.  Combining this high level of entertainment with some of the best BBQ in the world, how can you go wrong?

Tradition, Family, Honor and yes, even some change for the better certainly describes Schoepf’s BBQ and I know when you visit, you will agree how good it really is.

Schoepf’s BBQ is located at 702 E. Central Ave in Belton, Texas.  If you need to call you can reach them at 254.939.1511 or view their menu and upcoming events, catering or other special requests on their website at https://www.schoepfsbbq.com  See you soon Texas Barbecue and next time we meet, let’s do it in Belton, at Schoepf’s BBQ.