After sitting down and speaking with Staci several times I found that unlike most of the ladies we’ve honored, barbecue hasn’t always been a family business.  However, she does share one thing with the others and that is a desire to be the best at what she does.  Starting out early, her parents Danny and Bonnie Ramm instilled a great work ethic on her and because she accepted it, others took note and Staci advanced in responsibility and stature through her young years.  Both parents holding down jobs during the week, they partnered with relatives in a small store where Staci started working as a cashier.  Then at age 14, she had gained so much respect that she was hired at an Antique Store/Ice-cream Parlor.  Staci continued to gain the respect of others and it seemed that everyone was interested in hiring her.  In her Senior year she was offered a job as a Pharmacy Technician at Scott & White and during the time after her High School graduation, Staci continued to work for them for six years as she got her associates degree at Temple Jr. College and then going on to get a degree from Texas A&M in Agricultural Economics.  After graduation, Staci accepted a position at ConAgra as a Sales Rep down in San Antonio but of course, it didn’t take long until a promotion as a Sales Manager came into the picture in Arkansas. Unfortunately for Arkansas, this Texas girl wanted to get back home so she took a new job with HMR in Dallas as a pharmaceutical sales rep and soon after that, she and her long time boyfriend and fiancé Ronnie Schoepf decided it was time to tie the knot so they got married.  While in the Dallas area they both worked in pharmaceutical sales for approximately five years but as the family was growing they wanted to get closer to home in the Belton/Salado area.  Ronnie then accepted a transfer with his pharmaceutical company to Salado.  Six months latter, Staci transferred from Dallas and joined Ronnie in Salado.  They both continued to do pharmaceutical sales for the next five years in the Central Texas area but in 2007 they purchased Schoepf’s BBQ from Ronnie Dad, so after eight years in the pharmaceutical business, Ronnie left his job and started running Schoepf’s BBQ full time.  Finally in 2011, after thirteen years in pharmaceutical sales, Staci left her position and joined Ronnie in running the business. 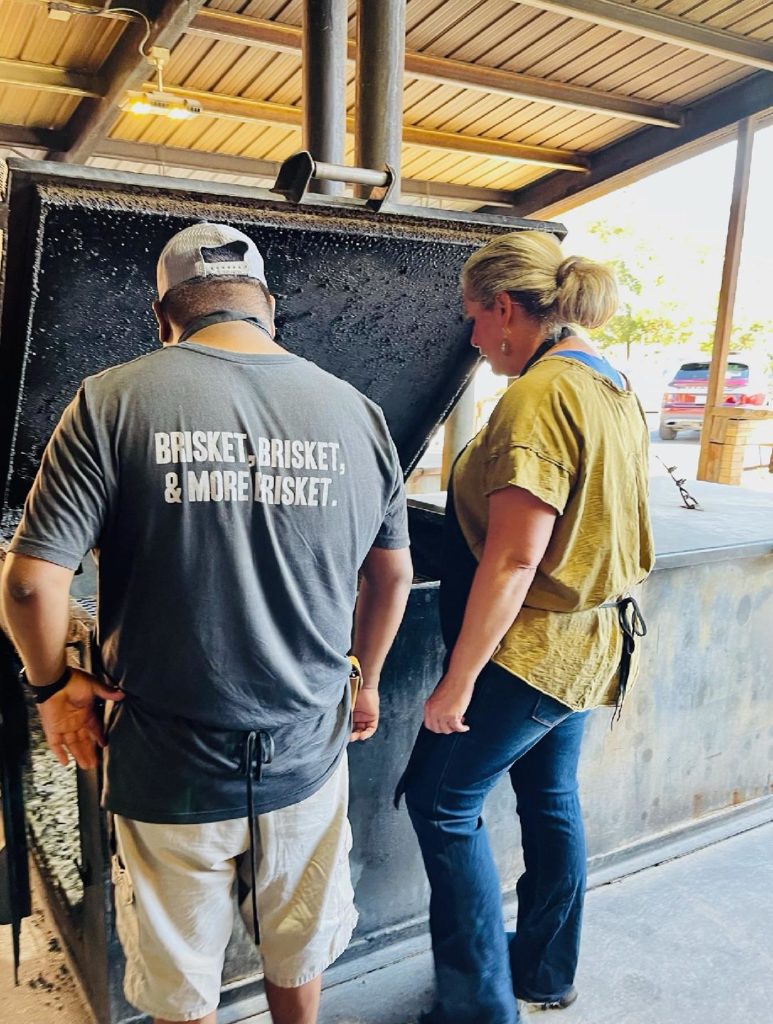 Of course, life gives you all kinds of challenges and from 2011 until today, the Schoepf family has gone through a lot.  One of those challenges being a 100 year flood bringing 3 feet of water into the restaurant just as they were about to complete their new remodel and all of this, while still growing a family.   Staci said the challenges have been difficult but one thing she and Ronnie have in common, “we’re not quitters.”  She said over the next few years, she learned that the business consumes you and it is your life if you want it to be successful.  After a few years of owning a Meat Market and a Home Decor Store, they sold those businesses and focused full time on Schoepf’s BBQ.  Staci decided that we need to make this business the best it can be so she and Ronnie came up with a plan and as Staci puts it, that in order to be the best we have to do two things.  “One, we must be known for our brisket and two, we must provide the best experience for our customers as possible.”  So, to do that, instead of reinventing the wheel, she looked at what made others in the business successful and she soon found out that she and Ronnie already had a great foundation in the first requirement, hard work.

After studying the BBQ business in depth, Staci said, we have to change things to included, how they seasoned their brisket, changing the brisket from Choice to Prime, what wood they used changing from mesquite to oak, how the employees were slicing brisket and the menu, just to name a few.  Plus, the seasoning and cooking techniques was changed on several of the meat items as well. (Ribs, Pork Chops, and Turkey)  Staci also said prior to the changes, there really was no rhyme or reason to how the employees sliced brisket or intent on the presentation of the food placed on the tray.  Today, Staci seasons 99% of the briskets being put on the Pit.  She’s trained the employees on how to trim the brisket, the techniques needed to produce a great brisket and how to slice the brisket.  Now, the customer is politely engaged by the employee, asking several questions on what they are looking for to include of course, whether the customer is wanting moist or lean on their brisket selection. Then, the change on the menu was very big also.  Of course you will get the brisket, sausage and pork ribs (spare & baby back) but you will also get beef ribs, turkey, chicken, quail, sausage poppers and even a ribeye if that is what you are looking for.  Next, for about eleven years now, Staci has had a Tex-Mex twist to her menu which includes about 30 different items.  All the sides including pasta dishes, baked potatoes, catfish and various other side items and desserts are either Staci’s recipes or she has merely tweaked them to add a little something extra for the customer.   Finally, a few years back, Staci wanted to change their serving pit which is inside the building and how they maintained the heat on it.  Instead of taking the finished product and then placing it on the serving pit heated by coals, Staci did some research and had it converted to being an electric warmer.  Just like everyone else does with just a regular warmer however, she kept her old nostalgic serving pit coming out of the wall which maintains the authentic look.  One more bonus for both the customers and the employees, Staci added A/C to the serving pit area and in the summertime, it’s a game changer. 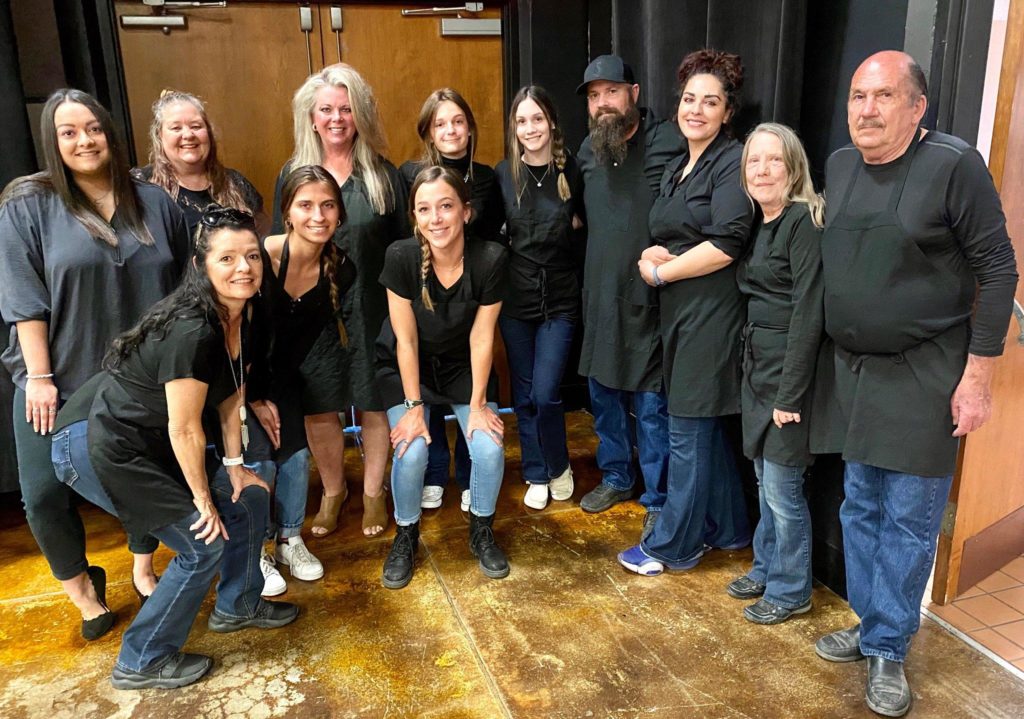 Today, Staci and Ronnie work daily to provide the best BBQ and the best experience a customer can have while visiting their establishment.  Ronnie, along with managing the business while they both juggle the role of Mom and Dad, works hard at providing entertainment outside with one of the very best music venues in the country today and on occasion, he will even throw in a Bull Riding for the rodeo fans.  Staci and Ronnie both agree that separately they could run the entire business alone but why do that when you have the wealth of talent and the extreme overdrive for success of your best friend right next to you?  Open 7 days a week, from 10:30am – 8pm, Schoepf’s BBQ is certainly a main stop on the Texas Barbecue trail and this writer promises you that if you don’t stop here, you will be missing out on some of the best BBQ you will ever eat.

Staci Schoepf, with all your hard work, dedication and love for the art and the business, Texas Barbecue is honored to have you join such an elite group of ladies as our final inductee into the Class of 2021’s, Women of Texas Barbecue.  You are truly one of the best.