The First Lady of Barbecue

Facebook
Twitter
LinkedIn
I could hear the cows bawling in the background as I stepped out of the truck.  Just down the street is the old sale barn where every Saturday for decades now Ranchers have been bringing their Cattle to market.   Off to my right, just about the only lights on in town are in what at first appears to be an old work shed.  Its 4:45 a.m. and as I look closer, I can see a couple of people scurrying back and forth from one place to another.  At this time in the morning, it’s hard to see any signs except one and if you know anything about Texas Barbecue it’s a big sign in the form of a little lady.  With a somewhat cult following, this woman is often referred to as the First Lady of Barbecue. Yep, I’ve arrived at Snow’s BBQ in Lexington, Texas and just a few yards away moving from pit to pit is the famous Pit Master, Tootsie Tomanetz.

With her barbecue roots going back to 1966, Tootsie started working at City Meat Market in Giddings, under the guidance of Pit Master Orange Holloway.  Being shorthanded, her husband Edward who already worked there told her about a part time job, so she took it.  After just a short time and seeing how well she worked, they hired her full time and Tootsie and her husband continued to work there for the next 10 years.  In 1976 they bought City Meat Market in Lexington and continued that business for 20 years as she was busy honing her skills as both a Pit Master and a Butcher.  Tootsie says that back then, brisket hadn’t caught on as it has today, and that sausage was the big seller. 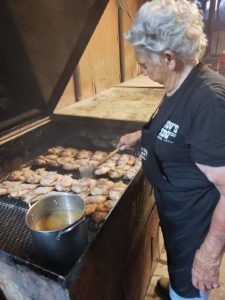 Today, Tootsie works alongside the owner of Snow’s BBQ, Realtor,ex-Rodeo Star, Bullfighter and Funny Man, Kerry Bexely.  Together since 2003 they’ve been making some of the best barbecue in Texas, which of course means the World.  During this time, they’ve been named Texas Monthly’s # 1 Barbecue joint twice, the first time in 2008 and then again in 2017.  Today you can drive up to Snow’s BBQ at 7 a.m. and see a line of people going across the property, out around into the alley, around that corner into the street and back around the block.  Yes, the barbecue is that good.

I asked Tootsie about what she thought about the rise in popularity of barbecue in the world today and she said it was great to see but she wasn’t sold on how long everyone would stay in business.  She said, “You have to love what you’re doing, and you can’t just learn it overnight.  It takes years to gain the knowledge and experience needed to make good barbecue.”  I also asked her about the types and grade of briskets the competition cookers are using to win in these BBQ cook-offs.  She kind of laughed and said, “It really doesn’t matter, you just need to know what you’re doing and make sure you give each brisket some TLC.” 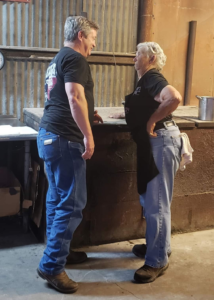 Later that morning, I had some friends that flew all the way in from Australia just to come eat at Texas Monthly’s # 1 pick and together we tasted what is truly some of the best brisket in the world.  We also experienced something we found unique.  A phenomenon that with your first bite of brisket triggers an involuntary loss of muscle, a phenomenon causing your eyes to roll back in your head and your brain to send weird signals to your mouth and as you’re trying to eat and it says words like “oh” and “wow” and then you make noises and grunts like, “ummp” and “mmmm.”  You just can’t believe some of the sounds coming from you that indicate what a wonderful experience you are having.
As I walked through the pit room with Tootsie, I realized that I was walking with a Texas Barbecue celebrity.  I was walking with history being made and that I would be telling this story about Tootsie for years to come.  I realized that this little woman standing around 5’3” was a giant among Barbecue Pit Masters to say the least.  Of course, all the praise is well deserved of the 2018 Barbecue Hall of Fame Inductee but my word or the word of any other person writing about barbecue doesn’t mean a thing.   No, Tootsie let’s her Texas Barbecue do all the talking on its own.
Snow’s BBQ is located at 516 Main St, Lexington Texas 78947
979.773.4640